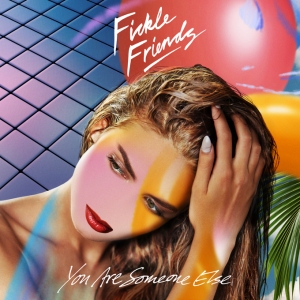 It’s pretty remarkable that a band that has been doing its thing for as long as Brighton five-piece Fickle Friends are only now putting out their debut LP, You Are Someone Else, on Friday 16 March. A steady stream of radio-friendly songs – backed up by a relentless touring and festival schedule – has established a solid reputation for consistently excellent indie-pop pretty much since they first got together in 2014, so it’s little wonder this release has been so hotly anticipated.

Album opener Wake Me Up sets the tempo perfectly, setting a spring in the step that leads seamlessly into Glue. What follows is a collection of earworm tunes, many of which casual listeners will be surprised to discover are way more familiar than they would have expected, such has been the airplay and TV spot usage over the last couple of years.

Fickle Friends – Wake Me Up

Old favourite Swim still sounds as good as ever, while newer track Hard To Be Myself delivers some of the quirk that FF do so well, aligned with some characteristally honest and genuine lyrics from lead singer Natti Shiner. Say No More, Brooklyn and the quite brilliant Hello Hello all sparkle too, although single Cry Baby doesn’t make the cut for the LP which might disappoint some.

Despite the familiarity of many of the songs, there are a few new gems to discover too. Bite is a hook-fuelled blast from the 80s, while emotional vulnerabilities are exposed on Heartbroken, a song about feeling disheartened when you write a song that you love but no-one replies when you send it to them. In My Head stands alone on the album, being pretty much the only truly downtempo track, but it utilises its two minutes right in the middle of the tracklist just perfectly.

Admittedly, there are one or two tracks that struggle to compete with the sheer perfection of some of the previously released singles, but even so, it would be wildly unfair to suggest Rotation and She are weak points in any way, with each more than worthy of its place in this 50+ minute collection.

The album is rounded off with Useless, perhaps our favourite of the previously unheard tunes, and packing something of a punchy swagger to wrap things up nicely.

For fans of the band – and judging by the scaling up of the sizes of venues for each of their successive touring adventures, there are plenty of them around nowadays – it’s well beyond time that this LP saw the light of day. But what’s quite clear is that the time it has taken to get to this point has had an incredibly positive effect on the quality of material on offer here. Recorded in Los Angeles, the tracks have a light, uptempo bounce of a band that has clearly grown in confidence and taken the time required to deliver a coherant, measured and fresh-sounding album that reflects just what they’re capable of.

It is a slick and polished debut. Easy though it would be to put a lot of the credit for that to Mike Crossley – a producer with a frankly outrageous pedigree which includes work with the likes of Foals, Keane, The Enemy, Jake Bugg, Razorlight and The 1975 – this same level of cohesion is delivered in their live shows, so this is far from solely being down to studio alchemy.

It’s a grown-up record from an intelligent band. Rushing to get an album out a couple of years ago may not have delivered such an accomplished end product as this, and could easily have sold their considerable talents short. Long-awaited yes, but totally worth that wait.